It’s Super Bowl week, and the big game will result in one of two outcomes. It will either be another signature achievement for Peyton Manning or it will be a coronation ceremony for the NFL’s best player of 2015. This season will live on in the annals of NFL lore as either the season Peyton Manning finally got his second ring, or as the season when Cam Newton put himself into special company. For this writer, this season is being remembered one way no matter what happens on Sunday night.

Completely leaving out Newton’s unprecedented statistical achievements and his incredible ability to direct a dynamic offense in the complete absence of dynamic players, Newton has just been an absolute joy to watch this year. He makes Ted Ginn look good! He took a team that few expected to do well and has them one win away from an 18-1 Super Bowl-winning season. The 1984 San Francisco 49ers and the 1985 Chicago Bears are the only two teams who have accomplished that before.

The guy has an absolute cannon that can fit tough throws into the tightest windows you can imagine, he makes exciting plays with his arm and his legs, and he’s the Panthers unquestioned leader. He’s set the tone all season for the NFL’s best team and he has fun while he’s doing it. 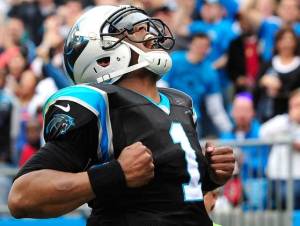 So why has Newton been the object of so much fan outrage? Cam Newton having fun on a football field has been one of the best things about watching the NFL this season for me. His positive energy is felt all through the rest of his offense. Watching the games, it’s obvious that everyone on the Panthers loves playing with him. And still, there’s something about this guy that just pisses everyone off. That negative sentiment is best represented by two open fan letters.

Sore Loser #1 writes in from Nashville, Tennessee. You can read the full letter here and groan through the whole thing, but here are the important excerpts:

“That game happened to be my nine year old daughter’s first live NFL experience … we had a close up view of your conduct in the fourth quarter. The chest puffs. The pelvic thrusts. The arrogant struts and the “in your face” taunting of both the Titans’ players and fans. We saw it all … My daughter sensed the change immediately – and started asking questions. Won’t he get in trouble for doing that? Is he trying to make people mad? Do you think he knows he looks like a spoiled brat? … I didn’t have great answers for her, and honestly, in an effort to minimize your negative impact and what was otherwise a really fun day, I redirected her attention to the cheerleaders and mascot … I don’t know about your family life Mr. Newton, but I think I’m safe in saying thousands of kids watch you every week. You have amazing talent and an incredible platform to be a role model for them. Unfortunately, what you modeled for them today was egotism, arrogance and poor sportsmanship.”

Sore Loser #2 writes in from Seattle, serving as a representative for a fan base that has gone from “completely inoffensive” to “completely insufferable” in three years. Your gag reflex is going to kick in numerous times (and not just at the grammar and syntax), but we’ll get through this together:

“My news feed is filled with you, Mr. Newton, and not in a good way. A video of you pulling a 12th flag down and throwing it to the ground like garbage. You see the one that people don’t realize is, Seahawks fans aren’t just fans. The 12th man is a community … So you see, Cam, disrespecting the 12th man flag isn’t just disrespecting our team, it is disrespecting the fans that back our team. A community that feeds and clothes the homeless … You see, Cam, while you are practicing for your next game, our QB will be at Seattle Children’s Hospital raising the flag that you shamefully threw to the ground … So Cam, even though you may have won this game, it is the Seahawks and the 12th man who are the real winners. Win or lose we come with class, respect, a love for the game, a willingness to help others, love for God, and love for those surrounding us. So Mr. Classless Cam Newton, good luck and may God teach you what real winning looks like.” 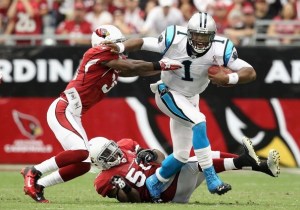 Emphasis mine, just to point out that these are virtues being trumpeted by Seahawks fans – the people who root for Pete Carroll, Richard Sherman, and Marshawn Lynch, all of whom have been guilty of the same behavior that has them upset at Cam Newton to the point of starting a fan petition to ban Cam Newton from their stadium in advance of their game there next season. Because how could one abide such a showboat in their hallowed stadium? How, indeed?**

There’s way too much to go through in that fan letter – first off, you are precisely “just fans” just like every other set of NFL fans, you stole the “12th Man” moniker from Texas A&M (who probably stole it from someone else) and you know it so stop being so goddamned precious about it. I could go on to explore the entire thing comprehensively, but why bother? Besides, that would take away from the larger point that these letters together illuminate.

These are the people who are most stridently against Cam Newton. People who can’t deal with losing and choose to project their perspective and concern over long-term implications onto their nine year-old children; people who champion the virtues of sportsmanship and then conveniently ignore that the hardest and thus most important part of being a good sport is class in defeat. People who prop up cancer-stricken children to make themselves feel better about losing a football game. All of these are much more deplorable than a man who’s made the bold decision to enjoy the view from his new perch.

Cam Newton is going to be involved with at least one touchdown this Sunday. He will dance and dab and smile and jump around with his teammates. Count me among the people who would much rather watch a player show some joy on a sports field than someone who cares about being palatable to the fans he’s crushing who are going to hate him no matter what. I’ll be partying with those whose enjoyment of NFL games and players is not so limited as to not appreciate that someone has zero fucks to give about fitting into American sports’ most rigid positional archetype – an archetype Newton has the chance to blow sky high Sunday night.


**Disclaimer: Richard Sherman being jacked up after making a game-winning play that put the Seahawks into the Super Bowl was beautiful and I wish every single postgame interview was exactly like it. The point stands: people in glass houses …