The goal of this weekly HBT installment all year has been to recap the week’s games and evaluate what they mean for the prospects of the teams involved. The season is over for 20 of the League’s 32 teams and the playoff picture has been decided for the 12 teams still playing. We don’t need to wonder what Week 17’s games meant for the playoff picture. We know. We’ll be focusing on the NFL’s better teams later this week, when you can check back for our playoff matchup previews.

Before we throw ourselves into the playoffs and forget about the League’s eliminated teams completely, it’s time to recap Black Monday and the annual series of Head Coach and front office firings.

Who Got Fired? – What Went Wrong? 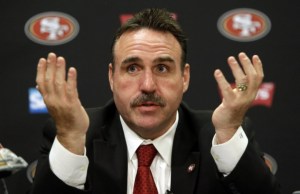 49ers Head Coach Jim Tomsula – Just about everything, really. Tomsula was asked to slot in as the figurehead of an organization in turmoil both on and off the field. Jim Harbaugh, the Head Coach who turned the franchise from laughing stock to annual contender, was chased out of town by resentful ownership. The list of important players lost to either retirement or free agency was longer than War and Peace. Franchise quarterback Colin Kaepernick steadily regressed to the point of being benched for Blaine Gabbert. And they played in a really good division. This was an impossible situation from the get go and it’s hard to imagine that anyone in Tomsula’s shoes would find success. However, if you’re not convinced of a Coach’s long-term prospects, severing ties in an offseason full of attractive candidates makes sense. General Manager Trent Baalke will be keeping his job. He’ll get to celebrate by trying to right this burning ship by finding their next Head Coach.

Browns Head Coach Mike Pettine – There are only 32 NFL Head Coaching gigs, and Mike Pettine happened to be offered this one. Stop me if you’ve heard this one before: the Cleveland Browns are blowing up the franchise. It’s hard to make a case that the decision to move on from Pettine is not justifiable, but the best one that’s there to make is that the tenure of also-fired General Manager Ray Farmer has been a disaster.

Farmer’s free agent moves didn’t work, with the Dwayne Bowe signing serving as the latest example that a history of working with a player does not in and of itself make signing that player a good idea. And his drafts were laughably bad. Last Spring, he spent a fourth round pick on Vince Mayle at a time when Tyler Lockett, Stefon Diggs, and John Brown were still on the board. Mayle didn’t make the Browns’ roster out of training camp. 2014 was even more of a waste. Farmer drafted Terrance West in the 4th round instead of Jeremy Hill, Carlos Hyde, or Devonta Freeman, and Farmer’s waste of his two first round picks is the stuff of legend. In a draft loaded with good players, Farmer drafted Justin Gilbert and Johnny Bottle Service, neither of whom appear likely to start next season with the Browns just two seasons after being first round picks. Oi. 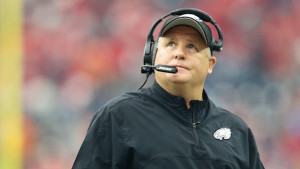 Not long after taking over the team, Kelly made the decision to replace a revitalized Michael Vick with the younger Nick Foles. That decision worked beautifully, with Foles posting some of the best numbers in the NFLat the beginning of his tenure as Philadelphia’s QB1. Perhaps a bit drunk on his own Kool-Aid, Kelly immediately began to strip his roster of many of his predecessor’s most talented players. Michael Vick, LeSean McCoy, DeSean Jackson, Jeremy Maclin, Evan Mathis, and Nick Foles were all traded or cut in favor of inferior talents that Kelly thought fit his system better.

To make the Exodus of Reid’s best players worse, the players Kelly brought in from the outside busted across the board. Sam Bradford has been a disaster this season. DeMarco Murray has been an unproductive malcontent. Byron Maxwell was given a massive contract to help Philadelphia’s secondary, and they managed only a paltry increase from 18th to 14th in pass defense DVOA; hardly a jump worth paying top dollar for. Kelly is going to get another shot to Coach in the NFL. One hopes that he would learn his lesson from this experience. You can’t just put any old jamokes in your team’s uniforms and win. Good coaching matters. Talent matters more. 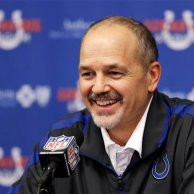 Colts Head Coach Chuck Pagano – Well, after a season this bad, it’s hardly surprising that the Colts would opt to go a completely new direc—WHAAAAAAAAAAAAAT?!?!?!?!? The Colts were a complete disaster this year! Andrew Luck was either playing hurt or not playing at all and the absence of his brilliance highlighted this team for what it is – a bad, bad football team that can’t even post a winning record in the worst division in the NFL. This season had all the hallmarks of a franchise that needs a housecleaning: missing the Playoffs after some idiots – more specifically this idiot – predicted that they’d win 11 or 12 games, the Head Coach talking trash about the GM’s job performance in press conferences, horribly ill-advised trick plays that should be played out on a loop over the Benny Hill music. (I’m a Redskins fan, I live this shit!) It’s not fun to advocate for people losing their jobs, but in an industry where Coaches and GMs get hired to get fired, how in the World did Jim Irsay arrive at the decision that bringing back either of these guys, let alone both of them together, was the smart move? 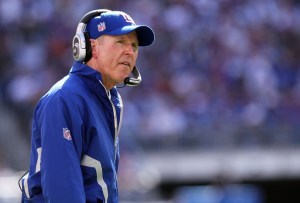 Giants Head Coach Tom Coughlin – Tom Coughlin resigned his post yesterday afternoon in what I’m assuming was a professional courtesy from ownership for a Head Coach who brought two Super Bowls to New York and will be remembered fondly everywhere but New England for preventing Belichick-Brady rings 4 and 5, respectively.

Any of the four NFC East teams this year had the opportunity to grab the thing by the scruff of the neck and go get a Playoff spot with Washington the team that ended up doing so. Its particularly disappointing when the Giants could not succeed despite having the division’s best QB and best Wide Receiver by a mile. There has been a rush by some to point out that Coughlin is the only Black Monday casualty who left a team with a reliable Quarterback. Nothing swings games in your team’s favor more than good Quarterback play, so this isn’t a completely useless observation, but it isn’t a particular useful one either.

The truth is that when one looks at the Giants roster, there just isn’t very much to go on after Eli Manning and Odell Beckham Jr. Some may argue that with better coaching, the Giants could have closed out enough games to make the Playoffs. I would argue that it’s a small miracle that the Giants managed to be competitive as frequently as they did. The Giants will have a new Head Coach next season. I doubt they will have a better one than Tom Coughlin.

Chargers Head Coach Mike McCoy kept his job, but there was a whole bunch housecleaning directly beneath him. Six San Diego assistant coaches were canned yesterday. Don’t expect to see this staff fill up too quickly. Apparently San Diego’s upper management is much more focused on getting the team relocated to Los Angeles than anything else at the moment.

Nothing is decided, but if Interim Head Coaches Dan Campbell (Miami) or Mike Mularkey (Tennessee) were going to be installed as permanent Head Coaches with their organizations after taking over midseason, we would almost certainly know about it by now. Expect new blood on both of those benches as well.

THE PLAYOFFS ARE HERE! Check back on Thursday, when we’ll be previewing Saturday’s games. I’m about to nerd out on football for a month straight and I couldn’t be happier.