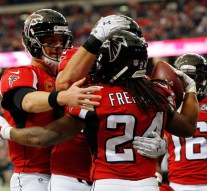 The Falcons’ offensive line is comfortably the best thing about the Falcons’ roster. They were a very strong unit one season ago and they filled in their one position of weakness with former Browns’ Center Alex Mack, who is one of the NFL’s best. This offensive line’s ceiling is high enough to give Dallas a run for their money as the best in the League.

A top notch offensive line makes everyone else’s life easier, and the three most likely beneficiaries are Atlanta’s QB-RB-WR triplets that’s as good as any. That begins with Quarterback Matt Ryan. Ryan has the arm to make all of the throws and his inability to penetrate the pantheon of the League’s “elite” quarterbacks has led many to underrate him as a player. His stat line from one season ago is hardly eye-popping, but it should be noted that he spent much of last season with an injured Julio Jones and an otherwise anonymous set of Wide Receivers.

But, even the hobbled version of Julio Jones is truly amazing. On his best day, Jones is unequaled as a Wide Receiver. He can do everything you need a receiver to do. He has the speed to beat slower cornerbacks and the size and strength to out-muscle bigger corners. His routes are so good that he routinely creates separation from even the best cover cornerbacks in the League. And he’s a board member of the NFL’s Always Open Club. When in doubt, lob it up at Julio Jones. The odds are pretty good he’s coming down with it.

Once you get past Jones, though, there is not anything to go on, really. Roddy White was a remarkable receiver for a decade, but he’s a husk of the player he once was and the Falcons chose to move on this offseason. The secondary options for Matt Ryan in the passing game will likely be Muhammad Sanu and Aldrick Robinson, who don’t have 2,500 career receiving yards between them. There’s also not going to be much help from the Tight End position with Jacob Tamme currently slated to start. The Falcons used a third-round draft pick on Tight End Austin Hooper. At a massive 6’4, 248, Hooper should have an accelerated learning curve coming out of Stanford’s pro-style offense. Don’t be surprised to see him overtake Tamme’s starting spot by midseason.

That lack of secondary receiving options will make an effective rushing game important for the Falcons’ offensive success. Devonta Freeman was one of the breakout stars of the 2015 season, but most of his impressive stat line came in a concentrated dose immediately after he became the starter. It’s fair to question just how good he actually is, given his unimpressive 4.0 yards/carry total from a season ago despite running behind one of the best offensive lines in the League AND arguably the the best fullback as well. Patrick DiMarco is the one fullback that will be mentioned in this preview series, which indicates how valuable he is as a blocker. Backup Tevin Coleman isn’t likely to unseat Freeman at any point of the season, so the Falcons need Freeman need to be more consistent than he was last season.

Desmond Trufant is an exceptional cornerback. A truly exceptional cornerback is an extremely valuable commodity, so that’s a pretty good place to start from when you’re trying to field a quality defense. The problem is that there’s very nearly nothing else good going on for Atlanta’s defense. 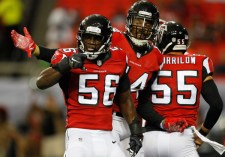 They’re also making very confusing decisions regarding their personnel. They signed Courtney Upshaw, who was a solid outside linebacker for the Ravens last season. Transitioning him to the Falcons’ 4-3 defensive base, they’ve converted him to Defensive Tackle, which is somewhat confounding. Vic Beasley showed enough as an edge rusher last season to think he could develop into a nice player, but for his sophomore season, Atlanta is moving him to outside linebacker. They signed Dwight Freeney to take his place on the line, but Freeney is well past his peak and won’t have the luxury of playing in Arizona’s defense this season.

The rest of the linebackers are a complete mystery. Atlanta’s current depth chart lists Paul Worrilow and Sean Weatherspoon as the remaining two starters, neither of whom have played enough in their careers to leave any sort of impression. That’s usually a bad sign. If the Falcons want to roll the dice with unproven commodities at linebacker, it would make more sense to play rookies De’Vondre Campbell and Deion Jones. Both of them would likely take their lumps adjusting to the League, but at least both have the talent pedigree to be more than unknown commodities by the late 20s like Worrilow and Weatherspoon.

The aforementioned Trufant will give opposing WR1s all they can handle, but opposing offenses with any sort of depth among their receiving options will give Atlanta fits. 2015 2nd-round pick Jalen Collins will likely be the other starter at Cornerback after he serves a four-game suspension, but he struggled mightily in his rookie campaign. Glass-half-full observers can point to the struggles of all inexperienced defensive backs as something to hold onto at the cornerback spot beyond Trufant. The Safeties aren’t much better or more experienced, as rookie Keanu Neal will be counted on for big contributions. Considering the big knocks on Neal were his skills in coverage and wrap-up tackling – two slightly important elements of being an NFL Safety – there’s plenty of reason for skepticism.

The offense stays healthy and the Ryan-Freeman-Jones triplets are brutally effective behind the League’s best offensive line. The young defense matures faster than expected and finishes around League-average. The Falcons don’t catch Cam Newton and the Panthers, but they are strong enough to win 10 games and snatch a wild card spot.

Julio Jones or Matt Ryan get a serious injury and the offense is punchless and ineffective all year. On defense, the Falcons have neither the personnel to stop the run nor the experience to effectively contain opposing passing attacks. Last season’s 3-8 finish keeps right on rolling.

I want to believe in this offense and this team. I love great offensive line play and I love Julio Jones. The NFL is better with more good quarterbacks and it would be great to see Matt Ryan catapult himself into the top tier.

But, the defense has a chance to be very bad and there are few other teams in the NFL that are so dependent on one or two guys staying healthy. If Ryan or Julio pick up even a semi-serious knock, the wheels could really come off the bus here, so we’ll play it safe.