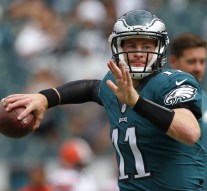 When I watched the tape: One thing stood out to me the most. Zip. Carson Wentz is a natural-looking thrower who can really fire it outside the numbers on a rope. Everyone says “arm strength is overrated in the NFL”…until that awkward moment when you have to stick a ten yard out on 4th and 8 with tight coverage outside the numbers. If you underthrow/lollipop throw that shit, it’s a pick-6.

On the negative side, Wentz does have a very Jameis-like motion (probably because they both played baseball) which leads to his windup being a little longer than you’d like. In the quarterbacking world, there is a natural tradeoff between the amount of velocity you can put on the ball and the quickness with which you can release it, Wentz seem to be no different. 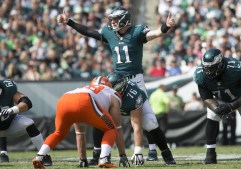 Don’t shoot your dick off: Far too often as football fans when praising young quarterbacks, we confuse “not turning the ball over” with “playing well”, as if one of them equates the other. This is simply dumb. Avoiding costly mistakes is a prerequisite of playing well, but not an equivalency. Who cares if you didn’t turn it over once, and finished the game 12/23 passing for 168 yards. You didn’t play well (just look at Geno Smith’s final month of 2013 that Jets fans misinterpreted as progress). Other than a tipped ball that was Agholor’s fault, Wentz did not make a single play that put his team in danger. Not one.

Those two Moonballs: His two touchdown passes down the sidelines to Matthews are GIFable plays that will make Birds fans want to grab the KY and a box of tissues. As a Dolphins fan who’s had to deal with RT17 for four years, I cannot emphasize enough how important it is for a QB to have an ability to put air under the football down the boundary. There’s a reason that NFL Defensive Coordinators stack the short middle against limited QBs on third and medium, and that’s because daring the passer to throw down the field or the sideline is a very sound strategy: those are the toughest throws to make.

Overall: 22/37 for 278 yds. 2-0, 101 rating. Anyone who watches football knows that passer rating (the traditional metric, not Dilfer’s QBR) is a flawed stat that doesn’t mean as much as it used to, but Wentz played well on Sunday. The Browns’ defense is pretty awful, so for that reason I’m “only” giving him a B+. When Eagles fans consider that Jared Goff is currently the 3rd string QB for the Rams, they have gotta feel pretty good about where their guy is now. 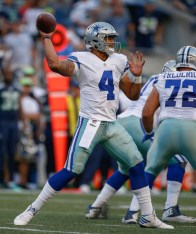 When I watched the film: So…the Cowboys O-line is pretty damn good. To be honest, it’s so good that its going to be difficult going forward to evaluate parts of Prescott’s game (throws under duress, evading pressure with footwork) because unfavorable situations inside the pocket won’t happen often.

Prescott has a strong arm, call it an 8 or so, and he can definitely make all the throws. When you watch him stand tall in the pocket and deliver the ball downfield to, Dez and Terrence Williams, you can see why the Cowboys are so high on him. However, you can also see why he was considered such a raw prospect coming out of Mississippi State as well. Not that being a “natural thrower” is a qualification for being a good NFL QB (look at how ugly Rivers looks), but Dak is the furthest things from a natural thrower. Oftentimes his motion gets him off-platform and unbalanced. When he scans the field, his feet do not follow his eyes as quickly as they should, which leaves him susceptible to jittery high throws (see the missed TD to Beasley on their 1st drive against the Giants).

Change the launching point: Coordinators implementing ‘roll-out’ concepts for their QB’s is kinda like girls throwing on a push up bra before going out: if you were really that hot shit, you wouldn’t have to rely on that. 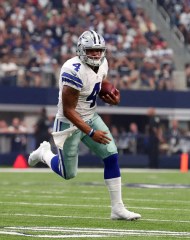 The best QB’s stand in the pocket and see the whole field…when you roll a QB out, you dumb down what he has to do, by cutting the field in half. Having said all that, with rookie QBs, especially those with next level athleticism like Prescott, it can lead to some huge plays due to the defense having to move with them and worry about the run. The Cowboys did that plenty with Prescott, and he did really well with it. There was one play in the second quarter where he was rolling left (to his non-throwing side, the more difficult side for a righty QB) and he squared his shoulders and threw an absolute missile to Cole Beasley between two defenders on the sideline. That throw probably traveled 20 yards through the air and had serious velocity on it. Given how dominant Dallas’ line is, and given how they don’t want him to become a Kaeper-gimmick who can’t read the entire field, I think it would be wise for the Cowboys to roll Prescott out sparingly, and not make it the entire offense. However it should certainly be in his arsenal.

Numbers can lie: Prescott played well. Perhaps not as well as Wentz, but it was close. Thing is though, numbers can lie. Wentz wasn’t even close to turning it over in his 67 snaps he took, whereas Dak threw 3 balls off his back foot into traffic at various points in the game. One of them safety Landon Collins had a great shot of intercepting. On the other side of the coin, his numbers would have looked better had Dez and Beasley not dropped very catch-able first half touchdown passes. The point is: see the game with your eyes, not your calculator.

Overall: The Cowboys may really be onto something here. It’s obviously Romo’s job once he comes back, but it’s safe to say that with this type of offensive line the Cowboys may be able to win some games with Prescott. I am not quite ready to say he’s an NFL franchise QB, I’ll probably need 1,500 more pass attempts to see for certain, but I wish my team had a 23-year-old who looked like this. Grade: B.