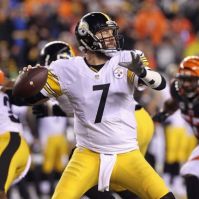 Both teams did their level best to combat the rain and generally unfavorable conditions, but this ended up being a mostly ho-hum affair until the game’s waning minutes.

Pittsburgh spent the first three quarters slowly building a 15-0 lead, but were never quite able to pull away and put meaningful distance between themselves and the Bengals. As brilliant as Ben Roethlisberger has been this year, Pittsburgh’s passing attack proved little match for the Cincinnati defense and the torrential Saturday evening rain. He passed for just 229 yards on 31 attempts. Antonio Brown was his usual brilliant self, on the receiving end of half of Roethlisberger’s passing yards (119 yards on 7 receptions).

There’s a familiar script for games played in such miserable weather conditions: passing game dies down, it’s just going to be one of those grind-it-out ugly games that’s won on the lines. This game was not much different. What was surprising is who came out on the right side of that trench battle. In the absence of starting running back Le’Veon Bell and backup running back up DeAngelo Williams, scrap heap running backs Fitzgerald Toussaint and Jordan Todman acclimated themselves extraordinarily well to this game. Todman was a firecracker out of the backfield, gaining 65 yards on just 11 carries, and Toussaint’s 60 receiving yards made him an invaluable passing option out of the backfield on a night when most of Pittsburgh’s wide receivers struggled. It’s hard to place much meaning on a game played out in these circumstances, but if Pittsburgh fans are looking for reasons to be optimistic going forward, one is that there aren’t many defenses better than Cincinnati’s and Toussaint and Todman more than held their own. 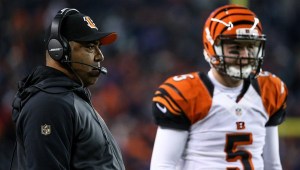 On the other side of the ball, the Bengals’ rushing attack was disappointing in a game when they needed to assert themselves. The Bengals’ two-headed monster of Jeremy Hill and Giovani Bernard has been running behind the NFL’s best offensive line when it comes to run blocking. We mentioned in our preview that Pittsburgh’s defense was deceptively good at stopping the run, but on a night when the pass was just not a viable option, Cincinnati needed to get the better of the ground battle. Pittsburgh shut them down, holding them to just 3.8 yards/carry on 24 attempts.

When the 4th Quarter began, it seemed as though the Bengals were about to bow out meekly in an unmemorable Round 1 game again, but down went Ben Roethlisberger and the Bengals roared back to life. A 42-yard pass interference penalty against AJ Green set up the touchdown that brought the Bengals back within one possession. After two more scoring drives, a team that had looked like they were running out the clock on their season for 45 minutes of football held a 16-15 lead, ready to exorcise Marvin Lewis’ playoff demons as Head Coach. And then, the Bengals lost their damned minds. 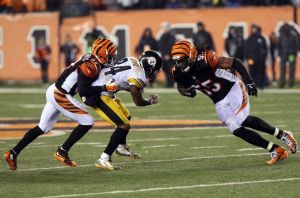 A few words about Vontaze Burfict’s hit on Antonio Brown:

15 yard penalties to Burfict and Adam Jones set up the game-winning field goal for a hobbled Ben Roethlisberger and the Steelers. A team that entered Week 17 needing a lot of help just to get into the Playoffs will travel to Denver next weekend to play for a spot in the AFC Championship game. 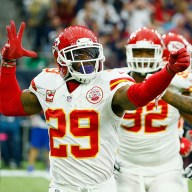 In my preview, I concluded that despite home-field advantage and a few exceptional talents, the Texans were completely out of their depth in this matchup and that the only way they could win this game would be to ride amazing performances from J.J. Watt and DeAndre Hopkins to victory. I now see how wrong I was in that assessment, because Hopkins and Watt both played very well and the Texans still got waxed in a game they never appeared to belong in.

Chiefs quarterback Alex Smith put forth the sort of underwhelming though undeniably efficient performance we’ve come to expect. He completed 17 of 22 passes for 190 yards and a Touchdown. The Texans were effective in stopping Kansas City’s league-best rushing attack, but Andy Reid was stubborn in his gameplan and eventually wore his opponent down. If you take out Alex Smith’s 27 yards of scrambles, the Chiefs averaged a meager 3.5 yards per carry, yet Reid still insisted on running the ball a whopping 37 times. Repeatedly doing something that plainly shouldn’t be classified as great in-game coaching, but Reid could stick with his preferred method of attack because of the complete ineptitude of his offense’s counterparts in Houston. 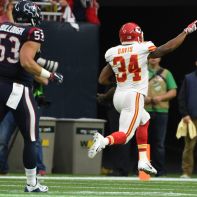 Brian Hoyer had one of the worst games I’ve ever seen a quarterback have, a statement I make without the faintest hint of hyperbole. He averaged 4 yards per passing attempt and tossed 4 Interceptions, including a backbreaking pick on the Kansas City two yard line in the first half to kill a promising drive. Houston Head Coach Bill O’Brien was correct to not take Hoyer out of the game, afterall Brandon Weeden is not floating the sinking ship in a playoff game. However, this game serves as a reminder of the difference made by the presence of a good, competent quarterback like Alex Smith. The Texans have a few really solid offensive players and a very exciting defense. And until they find someone who can simply give his teammates a chance to play to their strengths, Houston is going nowhere fast.

Kansas City has now won their last 11 games. They go to New England in a game that promises to be very interesting.

Check back here on Thursday afternoon, when we’ll have your AFC Divisional preview to get you ready for next weekend. Divisional Weekend is usually one of the best weekends of the year to be a football fan. Time to get really excited.