The NFL Playoffs kick off Saturday afternoon in Houston where the Chiefs will try to build on their impressive 10-game winning streak and the Texans will look to show that they belong in the postseason after limping to victory in the NFL’s worst division. 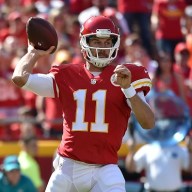 The Chiefs’ defense is their defining factor as a team, but they’ve still managed to field a very effective offense this year that ranks 6th in DVOA**. That’s a less impressive number in the context of other Playoff teams than it is against the entire league, but it’s still quite good.

Their attack is built around the League’s best rushing attack, where backups Charcandrick West and Spencer Ware have filled in wonderfully (4.5 yards/carry combined) in the injured Jamaal Charles’ absence. Quarterback Alex Smith’s mobility has also been a threat this year, adding nearly 500 rushing yards and a pair of rushing Touchdowns of his own.

Houston’s defense is also very good (8th in defensive DVOA), but has occasionally struggled this year against the run, where they rank just 13th in rush defense DVOA. Their real strength is in the pass rush, where they rank 6th in adjusted sack rate and feature J.J. Watt, the greatest football player on Earth. Watt played three games this season with a broken hand in a cast and still led the NFL in just about every single statistical category for defensive linemen. His matchup with Chiefs’ tackle Eric Fischer will be the most important individual matchup of the game. Fischer has had a good season, but the prospect of Watt and the rest of the Houston pass rush against this offensive line should scare the bijesus out of Andy Reid. The Chiefs’ offensive line ranked just 28th in adjusted sack rate this season. 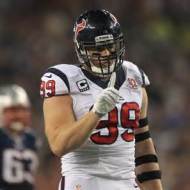 Under center, the chiefs have Alex Smith, who is blissfully average at playing Quarterback. He is fully capable of taking the Chiefs to victory in this game, but only if he has a clean pocket to throw from. This season, when Smith did not face pressure from his opponents’ pass rush, he had a Quarterback rating of 110.6. When he faced pressure, that number plummeted all the way down 57.5. All Quarterbacks are much better from a clean pocket, but few feature such a drastic difference in quality.

Kansas City will look to establish the run early and go back to it often as it’s the area where they have their clearest advantage. Expect a heavy dose of Charcandrick West, because if they can’t find success on the ground, Houston Defensive Coordinator Romeo Crennel will get to release the hounds against Smith, who could wilt badly under pressure. 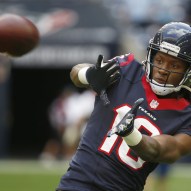 The Houston Texans have had trouble on offense this season, largely related to their instability at Quarterback. Even after Head Coach Bill O’Brien did the right thing by installing Brian Hoyer permanently as their starter, the team has had to resort to the likes of T.J. Yates and Brandon Weeden due to Hoyer’s injuries. Hoyer is far and away the best of those three quarterbacks, but that doesn’t make him particularly good and he is still inexperienced and completely untested in games like this.

That’s not all that Texans fans will be worried about, though. Looking back on Houston’s season, it’s difficult to identify anything on offense that they are particularly good at. They rank 22nd in pass offense DVOA, 26th in run offense DVOA, and 24th overall. On top of that, their below average offensive line (17th in run blocking and 18th in pass protection) will be without Left Tackle Duane Brown, who is out with a torn quadriceps. Backup Chris Clark will be protecting Brian Hoyer’s blindside Saturday afternoon, which is a frightening proposition. As much as we just extolled the virtues of Houston’s pass rush, Kansas City’s is every bit as good.

The Chiefs’ defense ranks 6th in defensive DVOA and their front 7, led by standout Tamba Hali, ranks 4th in the NFL in adjusted sack rate. To make matters worse for Houston, Justin Houston, another outstanding pass rusher, is targeting a return for this game. The Chiefs have had a more difficult time against the run this year (11th in rush defense DVOA), but the backups charged with replacing the contributions of an injured star have not been so able to step up in Houston as they were in Kansas City. Neither Alfred Blue nor Chris Polk has managed to reach even 4 yards/carry this season.

It’s hard to create a formula for success for Houston’s offense in this game. One of few ways one could theoretically do it would be to get the ball to Wide Receiver DeAndre Hopkins as frequently as possible. He’ll be matched up against the likely Defensive Rookie of the Year in Cornerback Marcus Peters, but Hopkins has been one of the League’s greatest revelations of 2015. He’s one of the 5 best players at his position and his matchup with Peters is a matchup he should be able to win.

The Chiefs are able to run the ball effectively, controlling time of possession and keeping the Houston pass rush in check. Eric Fischer does enough to prevent J.J. Watt from taking over the game as only he can and Alex Smith avoids any game-changing mistakes. The Kansas City defense stifles their overmatched counterparts on the other side of the ball and the Chiefs get their 11th win in a row in a low-scoring, but convincing win.

Houston’s front seven doesn’t allow Kansas City’s rushing attack to establish itself and get into a rhythm and J.J. Watt goes berserk. Alex Smith gets knocked down 10 times and never feels comfortable in the pocket as Kansas City’s offense falls apart. DeAndre Hopkins has a career day against Marcus Peters with 9+ receptions and the offense puts up enough points to eek out one of the ugliest Playoff games on record.

I can imagine any number of routes Kansas City could take to get this win, and for as much as I’ve tried, the only way I can divine a Houston victory is if J.J. Watt and DeAndre Hopkins both have the games of their lives. It’s well within the realm of possibility, but it’s not likely.

**All statistics in this article were gathered from footballoutsiders.com.