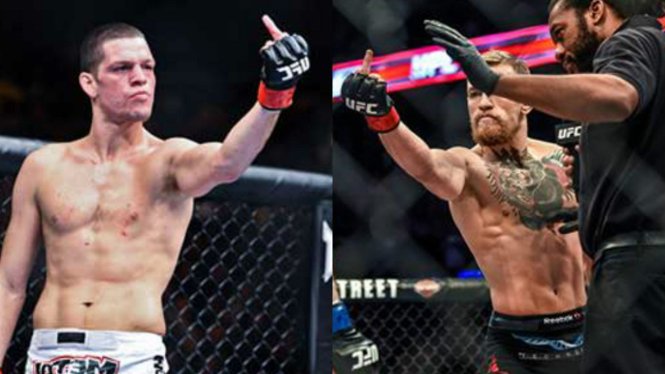 At UFC 196, the world stopped in the second frame of the main even fight as Nate Diaz wrapped his arms around Conor McGregor’s neck, and forced the Irish superstar to submit to a rear-naked choke. While a submission win for either Diaz brother is hardly surprising, the circumstances that got them there were completely unexpected. Fans and pundits alike believed that Diaz was just too slow, not athletic enough, and not mobile enough to compete on his feet against the one-man wrecking machine that was Conor McGregor.

“The Notorious” spent the first round proving them right, as Conor smashed a large gash over Diaz’s eye and seemed to be visibly frustrating the lanky California-born fighter on the feet. However, at the start of the second round, something no one expected happened…Nate Diaz began tagging Conor McGregor.

McGregor’s movement was considered elite leading up to this fight. He had spent countless hours with a movement coach expanding his athleticism and dexterity (or “playing touch-butt in a park” as Mr. Diaz called it) and in his previous bouts, he looked almost super-human as a result. Suddenly, the range of Diaz, who’s long been known for the ferocity of his 1-2 combination, began landing thudding shots to the head of a visibly tiring and confused looking McGregor.

Finally, one straight punch rocked the Irishman, forcing him to do something we’d never believed possible, shooting in for a desperation takedown. It was here that McGregor’s one-dimensional style was truly exposed. Diaz stuffed the shot, got to mount on the squirming Conor, and began to rain down vicious ground and pound before taking McGregor’s back and tapping him out.

McGregor, the wild, crazy, comic-book villain of MMA was defeated by one of the men who was meant to be a building block to his lightweight title reign.

Now, as UFC 200 stands in July, McGregor’s number one option has to be avenging that loss, and avenging it thoroughly. No split decisions, no close fights. McGregor will need to finish Diaz in a devastating manner or face the chance that some of his aura will disappear. Even a close win would spark the idea that he is not unbeatable.

While title defenses in the 145 pound division exist, the terrifying beating the Irishman suffered from Diaz on the ground doesn’t bode well for McGregor, who would likely find Frankie Edgar across the cage from him. Edgar, for those who don’t know, is a former NCAA Division 1 standout wrestler who recently submitted blackbelt Cub Swanson with a choke so powerful, he broke Swanson’s jaw.

McGregor is a freak athlete, and an incredibly gifted fighter. That said, in the UFC there are many great fighters and many freak athletes. McGregor will likely give a serious fight (and will likely win) against many strikers in the Featherweight and Lightweight divisions. He could stand and fight, and most likely win, against Cowboy Cerrone, Anthony Pettis, Edson Barbosa, Takanori Gomi, Sage Northcutt, Jose Aldo (again) or Jeremy Stephens. Honestly, he’s a serious threat to other high-level strikers.

That said, unless he fixes his ground game, his time as a champion will be over quickly. If McGregor can’t shore up his submission and take down defense, and finish Diaz in highlight reel fashion, he risks losing his stranglehold over “The McGregor Era”. An era of dominance he values above all belts.