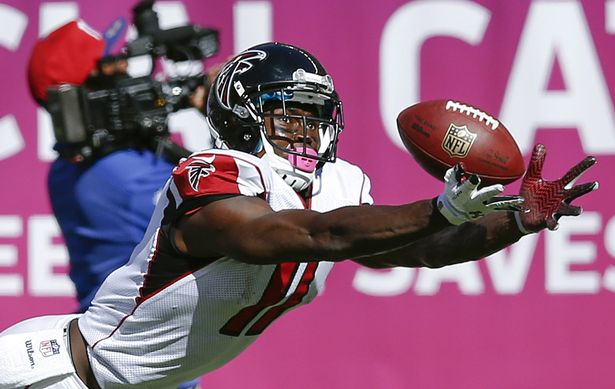 You know the guy who walks into the parlor and orders strawberry ice cream? I find him very similar to the guy who wants to watch a riveting NFC South match-up on a Sunday afternoon.

Analogies aside, this division does have one appealing aspect: every team has a big name player at the quarterback position. I didn’t say good (Jameis Winston), but I will say Matt Ryan, Drew Brees and Cam Newton are all on and probably starting on a team in your fantasy football league.

This division is going to come down to what every crappy division comes down to (see: NFC West five years ago), head-to-head match-ups.

Truth be told, you could put all four teams in a hat, draw a name and they could win this division with an 8-8 record. But how boring would a preview be if I said, “Well, everyone has a chance of winning.” Strawberry ice cream guy says that, not me.

The quarterback, Matt Ryan, stays healthy, throws twice as many touchdowns as interceptions and has Julio Jones to chuck the football to. Do you know who the back-up quarterback of the Falcons is? Of course not, because Mr. Dependable gives this team sixteen quality games a year.

Julio Jones was just paid and made a great cameo in the Madden 15 trailer, he is right in the prime of his career so I expect big numbers out of him. Roddy White flies under the radar with Jones around, but he has proven to be a dependable target for Matt Ryan, averaging around 1,000 yards a year.

The running back situation could be better, but I say use this offense like I run my Madden franchise and throw 95% of the time.

The defense has some work to do, but adding Vic Beasley to bolster the pass rush was a fantastic move. I mean just watch this video, the rookie has incredible speed rushing off the edge.

The Panthers won this division two years in a row, and they won a playoff game last year. Sure, it was against the Arizona Cardinals practice squad, but it still counts. Cam Newton is right in the sweet spot of his NFL career, where he has the accuracy and intelligence to make a great read in the pocket, but can also scramble for a first down when a play breaks down.

The problem is this Panthers team has a massive problem at the wide out position now that Kelvin Benjamin is out for the season. Ted Ginn Jr. is fast, but does not run great routes and has lousy hands. Rookie Devin Funchess will be expected to step up to fill Benjamin’s shoes but who else is there? Philly Brown? Jerricho Cotchery? Cam might have to target Greg Olson thirty times a game.

The defense is the best in the division and has one of the best defensive players in football – Luke Kuechly. Since I put a Beasley video above, might as well throw in a highlight reel of Luke.

The Panthers should be in plenty of close games with the stingy defense and solid ground attack featuring Jonathan Stewart and Mike Tolbert creating holes as the full back. But I have a tough time seeing this offense consistently moving the football with Cam struggling to find open receivers.

I feel like there are way too many people in fantasy football drafts who take Drew Brees too early and write ‘who dat’ in the message board. Brees is good, and he is one of those guys that manages to stay healthy and put up consistent numbers every single year. But like Cam Newton, Brees has limited options when it comes to throwing the football. The loss of Jimmy Graham hurts, and Marques Colston and Brandin Cooks don’t scream dynamic playmakers.

Brees does have an improved offensive line with Max Unger coming over from Seattle and giving the veteran quarterback time in the pocket can only bring good things. This could also be the year Mark Ingram explodes into a top tier NFL running back after a strong close to 2014.

The defense has made slight improvements, but when your defense is as bad as the Saints was last year, it’s almost impossible to be worse. This is where I see the Saints falling apart. With every 50 yard bomb Drew Brees throws, the opposing team can methodically march down the field in a long, clock killing drive. Also, since we’re already on the subject of the defense, remember this? Yeah.

I have to get one thing out of the way before I go through this team. Jameis Winston. The man with such a bad fumble it made us all forget about the Mark Sanchez butt fumble for about ten seconds. Winston has all the tools to become the next Josh Freeman. He has quick legs, a big arm and is tough to bring down, but I almost guarantee he throws at least two interceptions a game that make you scratch your head. Then we’ll hear the same typical lines after every game from the pro-Winston pundits around the nation – “take away a couple throws here and there, and he is a tremendous quarterback.” Sure.

The good news is SB Nation can change a few words and repost articles like this one all season long. Winston does have Mike Evans and Vincent Jackson to throw the ball to, which certainly makes life easier as a quarterback. Tampa also has a guy with the nickname “Muscle Hamster” running the football – Doug Martin. I root for him purely for the nickname alone.

The defense is nothing special, it’s not Saints bad, but not Panthers good. I can’t see this team overcoming Winston’s inevitable turnovers, which is unfortunate, because Mike Evans and Vincent Jackson should not be on a losing team.