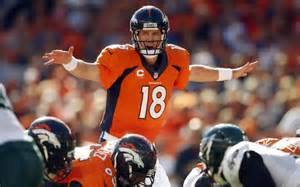 The NFL is a game of parity and change from week to week and year to year, except when it comes to the AFC West. All 4 teams in the west have ended the year in the same order in the standing in both 2013 and 2014, and I expect this trend to continue in 2015

Since Peyton Manning decided to bring his talents to Mile High in 2012, the Broncos have won the AFC West 3 straight seasons. And as long as Peyton is standing upright in the pocket for Denver the same outcome will occur in 2015.

Peyton does enter this year with some question marks as he saw a significant drop off in production at the end of last year due to a strained muscle in his throwing arm, costing Denver another shot at Super Bowl glory. New Head Coach Gary Kubiak has indicated that the offense this year will be a more balanced attack, so expect 2014 breakout star RB CJ Anderson to be heavily relied upon to take some of the strain off of Peyton’s shoulder. When Peyton does throw it he will still have one of the best 1-2 punch out wide in Demaryius Thomas and Emmanuel Sanders, so I expect big things from this offense. Defensively they led the preseason with 20 sacks and should continue to be an above-average unit moving forward. Barring an injury to Manning, the Broncos will cap off their 4th straight AFC West title.

If there is any team that might give the Broncos a run for their money it will probably be the Kansas City Chief, winners of 20 games over the last two seasons. Head Coach Andy Reid has built this team around a consistently average offense and a strong defense. QB Alex Smith will again lead the Chiefs into battle as he looks to actually throw a touchdown to a receiver this year, a feat previous thought impossible that he pulled in 2014. The addition of WR Jeremy Maclin should help reverse that trend. Running Back Jamal Charles will again be relied upon to carry the workload for Kansas City and unless Alex Smith suddenly becomes Andrew Luck, the offense will continue to live or die by his production.

Defensively, this team was a beast in 2014 and should continue to be near the top of the NFL in 2015. Led by Nose Tackle Dontari Poe, and linebackers Derrick Johnson and Justin Houston, the Chiefs should continue to rely on their defense holding teams to low totals, hopefully low enough to pull out some tight wins over quality opponents.

Tough road games against the Packers and Baltimore await, but Kansas City should be right in the playoff hunt in December.

Is this their last year in San Diego? Is this Philip Rivers’ last year with the Chargers? Both of these questions will weigh on San Diego in 2015, but if Rivers can keep his head and the team can avoid getting sucked into the discussion about potential relocation, San Diego should be able to put a strong effort in this year.

Offensively, this is Philip Rivers show. The veteran quarterback had a very nice season last year racking up over 4,000 yards with 31 TDs. He retains pretty much the same receiving core as he had in 2014 with Michael Floyd and Keenan Allen as his two main targets, and adds Stevie Johnson to the mix as well. San Diego will be without star TE Antonio Gates as he is suspended for the first 4 games for PED use. Rookie Running Back Melvin Gordon will be relied upon to replace the production of departed Ryan Mathews. If he can do so, the Chargers should continue to be an average offense in 2015.

On the other side of the ball, the Bolts’ defense should be a tick better than last year, but they wont be good enough to leap over Kansas City to truly challenge Denver at the top of the division. It looks like another .500 year for San Diego as they just miss the playoffs.

While San Diego and Kansas City aim to hopefully dethrone Denver at the top of the west, Oakland looks to make the jump to relevancy in 2015.

Quarterback Derrick Carr looks to improve on a promising rookie season in his second year at the helm, and he will have better weapons around him to do so. Running Back Latavius Murray showed some promising signs at the end of 2014 and fans of the black and silver hope that he takes a jump forward as he starts the season as their unquestioned lead back. Out wide, Oakland drafted Univ. of Alabama star Amari Cooper with the 5th overall pick giving Carr a much needed reliable target to throw to along with bringing in free agent WR Michael Crabtree.

However while Oakland’s offense should be better this year, their defense remains suspect. They gave up the most points of any team last year and will be towards the bottom of the NFL in that same category in 2015.

Oakland’s offense will win them an extra game or two from last year, but don’t expect the Raiders to compete for a Top-2 finish in the AFC West this year.