The American Football Conference, or AFC as it’s commonly called, features four divisions. Three of those divisions, the AFC East, North, and West are all respectable and legitimate professional football divisions featuring one very good football team and at least one more solid (if unspectacular) team that has managed to provide the illusion of divisional intrigue at various points this season. 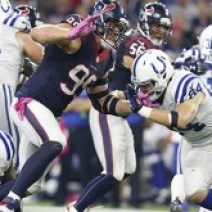 Meanwhile, in the AFC Poop, each of the four teams has spent the entire season begging one of the others to pick the thing up and run with it. None have yet obliged, but Houston gave their latest hesitant attempt on Sunday afternoon in a game featuring such direct Playoff implications that it regrettably cannot be ignored in this space.

Entering this head-to-head matchup deadlocked in first place with matching 6-7 records, the Texans seized sole possession of first place and a .500 record thanks to the golden arm of Brandon Weeden and his 105 total passing yards. The Texans now control their own destiny with easy matchups to come against the Jaguars and Titans.

16-10 is the kind of ugly scoreline you would expect from a game between these two teams. Appearances can deceive, but they did not in this case. This game was not that quiet girl in the corner who’s got a great personality. These are just two bad, BAD football teams that are very difficult to watch.

But, as a neutral, be happy about this result. As far as unwatchable teams go, the Texans do feature some fun players like DeAndre Hopkins and J.J. Watt, who is the most important part of a solid defense. If quarterback Brian Hoyer’s meeting with an independent neurologist today goes well, that makes them all the more watchable when the games will really count. Even so, with all three wild card contenders in such good form, it’s impossible to think that winning this division will earn the victor more than an opening weekend belting at the hands of Kansas City, Pittsburgh, or the New York Jets.

What Everyone Is Talking About: Panthers 38 – Giants 35 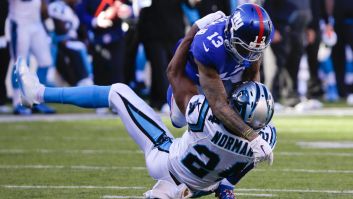 Holy garbage time, Batman! The Giants turned a 28-point third quarter deficit into tie game with less than two minutes left. It was an all-time great comeback against a 13-0 opponent and exactly the kind of fight New York needed to show to save their season. And absolutely none of that is going to get remembered after Cam Newton’s great last-minute drive to set up a game-winning field goal and the antics of one Odell Beckham Jr.

ODB was correctly suspended for one game for his undeniably dirty head-to-head hit on Josh Norman. It was the week’s most disappointing moment and it dominated our national Monday morning conversation.

It’s bad enough that what should be a fun game next Monday night between the Giants in “must-win” mode and the Vikings trying to clinch a postseason spot has now been worsened and cheapened. It’s even worse in what it means for how Beckham Jr. is perceived.

ODB has been one of the League’s two or three best wide receivers this season and one of its best and most exciting young players at any position. He is a real gem of the game, and plays like his targeting of Norman – on a comeback block, after the whistle, in the third quarter of a 35-7 game, against arguably the NFL’s best cornerback of 2015 – are the kinds of plays that leave a lasting stink on a player. His teammates could go a long way to washing that stink off by beating Minnesota next week in his absence.

Giants fans will, for once, be the world’s biggest Eagles fans next Saturday night, when the Washington Redskins – yes, those Washington Redskins – will be playing in Philly with a chance to clinch the NFC East thanks to their impressive win against Buffalo on Sunday. If the Eagles don’t win that game, the Giants’ season is over, their matchup with Minnesota meaningless.

What Everyone Probably Should Be Talking About: Broncos 27 – Steelers 34

Brock Osweiler faded badly in this tale of two halves, allowing Pittsburgh to cap a comeback with a late strike to from Ben Roethlisberger to Antonio Brown.

The Denver Broncos’ defense has been the NFL’s best this season and it’s been every bit as good as the Seattle defenses that led the charge to back-to-back Super Bowl appearances. Ben Roethlisberger and the Steelers waxed them to improve to 9-5 and maintain their leg up in the AFC Wild Card race over the Jets.

The Steelers offensive success was rather predictable this year with Ben Roethlisberger, Le’Veon Bell, and Antonio Brown forming the League’s best QB-RB-WR trio. But, Pittsburgh has remained in contention despite various injuries to Roethlisberger and Bell thanks to a surprisingly good defense. The Steelers rank 13th in defensive DVOA and though that’s hardly indicative of greatness, it is much better than that collection of players has any business being on paper.

The defense has kept them in the race this year, but the offense is still what makes them a threat going forward. With DeAngelo Williams capably filling in for Bell and Roethlisberger playing as well as ever, don’t sleep on Pittsburgh if they can power into the postseason. These guys can score – a lot – on anyone.

The Chiefs have won their last 8 games, with their two remaining matchups coming against Cleveland and Oakland. This could be the hottest team in the NFL entering the postseason. With possible first round matchups against Houston, a Dalton-less Cincinnati, or the bones of Peyton Manning, Kansas City has to like their chances of making a run in the AFC. THIS IS SO EXCITING! The Playoffs are going to be awesome this year.

Your “Football is the Worst” Moment of the Week:

Can I say the Houston-Indy matchup again? No? Apparently the judges wont let me repeat my answers so I’ll give it another go.

Your “Football is the Worst” Moment of the Week: Cardinals 40 – Eagles 17

Before this season began, the Philadelphia Eagles were one of the NFL’s most intriguing teams. Head Coach Chip Kelly was still held in high regard. The success of Nick Foles in his system, coupled with his ability to field a semi-productive offense with Mark Sanchez last season, led many observers to think that Kelly had created a sort of personnel-proof offense.

Kelly certainly seemed to think that was the case this offseason when his overhaul of the roster left fans scratching their heads. Kelly’s reputation as a Coach gave him the benefit of the doubt as a personnel guy the entire time, but one had to wonder: if all of these moves were being made by someone not named “Chip Kelly”, how would you be reacting to them?

The demise of GM Chip Kelly is no longer funny for everyone outside of Philadelphia. Despite the blowout scoreline, getting blown out by Arizona is no great mark of embarrassment. That’s been happening to a lot of teams this season. All the same, watching a team fall short of its projections makes for a less entertaining league and a big loss like this against a playoff team is a reminder of just how disappointed the Eagles should be with their season. 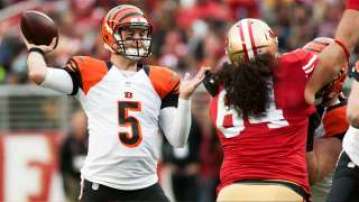 Bengals 24 – Ravens 14: A.J. McCarron was exactly as mediocre as the Bengals needed him to be to scratch out a win against hapless San Francisco. No meaningful Playoff implications can be drawn from this game. If A.J. McCarron is starting playoff games, the Bengals don’t have a prayer. All the same, Andy Dalton’s injury was the worst moment of last week and it’s good for the neutral fan to see that the bottom hasn’t completely fallen out of the Bengals’ season. A loss to San Francisco would have been a real bellwether moment on their chances to remain competitive. Any win for Cincinnati or any loss for Pittsburgh clinches the AFC North for Cincy, and Denver’s loss means that the Kitties still have the inside track for a bye week. Next Monday night, the Bengals will be playing the Broncos in a MASSIVE game for both teams. Another bye week gives each team more time to figure out its Quarterback situation, which could mean the difference between bowing out in the first round and making an appearance in the AFC Championship.

NFC North Update: The Packers improved to 10-4 to maintain their one-game division lead despite Minnesota’s impressive win against Chicago. All that stands between Minnesota and a Week 17 game with Green Bay to decide the NFC North Championship is a win next Sunday against the Odell Beckham-less Giants. Green Bay has been a far cry from the Aaron Rodgers teams we’ve come to expect this season, but they should be given credit for their ability to scratch out wins. As unimpressive as they’ve occasionally looked, they are still 10-4.

Minnesota really looks the more impressive outfit lately. Teddy Bridgewater has been brilliant in both of the last two weeks. If he has turned the corner, Minnesota all of a sudden looks dangerous. If his improved play is just a flash in the pan, then Minnesota fans shouldn’t be expecting great things once the postseason starts. Bridgewater is on the list of players to watch for the rest of the year.

We will NOT be taking next week off, because the League is about to get very, very interesting and we wouldn’t leave you out in the cold – or the thunder storms, if you live on the East Coast –on Christmas this year. From all of us at HBT Sports, Happy Holidays to you and yours. Thanks for following the NFL with us this year and we look forward to having you back in 2016.