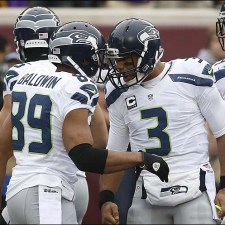 The reigning conference Champs put the conference upstarts from Minnesota in their place on Sunday afternoon. Seattle’s sluggish start was discussed in this space at length earlier this year and, 10 games later, it sure seems that they’ve found cures for all that ailed them. After starting 0-2, ranking 23rd in defensive DVOA, the Seahawks have won 7 of their last 10 and have now climbed the DVOA rankings all the way up to 7th. That kind of defensive rebound was on display Sunday when the Seahawks shut down Adrian Peterson completely. The NFL’s leading rusher managed just 18 yards on 8 carries.

Seattle’s defense rounding into form was bound to happen sooner or later, so although it’s scary it’s hardly surprising. What is surprising is just how good an offense they’ve managed to put together in Marshawn Lynch’s absence. Undrafted rookie running back Thomas Rawls continued to make Beast Mode look superfluous with another strong showing (19 carries, 101 yards). Rawls’ breakout has been largely thanks to an offensive line that has managed to provide good push in the running game.

Russell Wilson, on the other hand, owes none of his success to his offensive line, as the Seahawks have been arguably the worst pass protection unit in the League this season. After taking that into consideration, one has to stand in awe of what Wilson has been able to accomplish this season and particularly in the last few games. In the last three Seahawks’ wins, Wilson has gone 66/86 for 879 yards, 11 Touchdown passes and 0 Interceptions. He’s playing as well as anyone in the game and if he can stay in anything close to this form, Seattle is going to be very tough to beat.

Minnesota learned that the hard way. All the same, the Vikings and their fans should still be bullish on their chances of making the Playoffs. Thanks to the Rams and Falcons dropping off a cliff in the last five weeks, going a paltry 1-3 over their remaining four games to finish 9-7 will likely be good enough to snag a wildcard spot in the NFC. It was clear, however, that this game featured only one team that looks likely to do damage and cause problems once they qualify.

The Seahawks have benefitted from bye weeks and their vaunted home field advantage in their last two Playoff runs, advantages they are nearly certain not to have this year. All the same, it’s time for the entire NFL to go back to being very, very afraid of Seattle. They are finding their form at the best possible moment and they can beat anybody when they’re playing like this.

What Everyone Is Talking About: Eagles 35 – Patriots 28 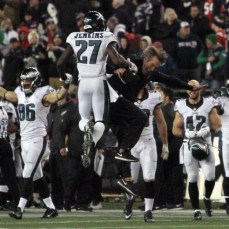 There is no mystery about who the eventual Champions will be here. At 10-2 with a dominant three-game lead, the Patriots winning their 7th straight (and 12th in the last 13 years. Christ.) division crown is just a matter of time. All the same, a team that doesn’t lose very much has slid backwards into a tie for home field advantage in the AFC thanks to a couple of rough weeks.

A furious but futile garbage time comeback attempt fell short in this game that was much more lopsided than the scoreboard would have you believe. The Eagles’ defense and special teams led the effort in one of the more surprising upsets of the season to this point. The Patriots threw the kitchen sink at the Eagles, resorting to a long play designed to turn Tom Brady into a receiver and a drop kick on the kickoff, of all things, but it wasn’t enough. The Patriots have given up 65 points in the last two weeks against two offenses that have really struggled this season. However, the Eagles offense was only responsible for 14 of Philly’s points, so there’s only so much blame to be assigned to the defense for this one.

To say that the last two weeks have exposed the Patriots in any meaningful sense would be an exaggeration. All these two games have shown is that the Patriots’ offense is quite limited in what it can do when Brady doesn’t have any of his top three preferred receiving targets (Dion Lewis, Rob Gronkowski, Julian Edelman). Gronkowski is the most important of those three, and he’s expected to be back soon. The division race is over. The perfect season is over. But, the Patriots still have the possibility of home field advantage in the playoffs to play for. A relatively easy remaining schedule and a return to health for Gronkowski before the postseason means that the Patriots are still very much a part of the Super Bowl discussion.

As for the Eagles, they somehow find themselves tied… TIED… for first place in the NFC East with a 5-7 record. And with head-to-head games remaining against Washington and the Giants, you can’t rule them out yet. God the NFC East is the worst.

What Everyone Probably Should Be Talking About: Chiefs 34 – Raiders 20

The only AFC division that hasn’t been sewn up is the South where all four teams stink, so this game was actually very important in terms of the AFC wildcard spots. Kansas City’s win, fueled by a 20-point fourth quarter rally, both kept them level with the Jets and Steelers at 7-5 and knocked one of their competing teams down to two games back with four remaining.

This game was a strange experience for the viewer. One can’t help but be disappointed that it seems that the Raiders’ season is over because they have been a shocking amount of fun to watch this year. At the same time, it’s very exciting when a team is really enjoying their football and the Chiefs are SO good right now! 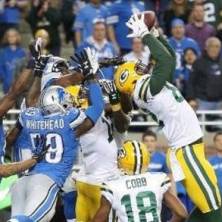 It took the Football Gods more than three years to make good on their Fail Mary debt to Green Bay, but they finally got them back with one of the most improbable last plays you’ll ever see on this week’s installment of Thursday Night Football. Watching the Packers has been a very strange experience this year. Banged up to hell though they are, one can’t help feeling that they shouldn’t be this poor and barely scratching out such unimpressive wins.

Your “Football is the Worst” Moment of the Week

Although this was one of the more entertaining weeks of the season, this week was awash in moments that left fans pulling their hair out. We have to break this down into two different sections. 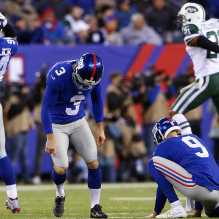 Playoff Implications: AFC Wildcard; NFC East Division Championship, Because Someone Has to Win, I Guess

The Jets emerged victorious in the battle for Gotham’s soul as the Giants found a way to fart away another commanding fourth quarter lead. Meanwhile, the Redskins celebrated their first week in first place by laying a turd on national television against Matt Cassell and the Cowboys. Both teams are now 5-7 and deadlocked with the Eagles in first place in the NFC East. For the Giants, this is the third time this season that they have managed to lose a game in which they held a double-digit fourth quarter lead. As for the Redskins, it’s very hard to overstate just how bad Dallas has been without Tony Romo this year. They’ve been inarguably one of the worst teams in the NFL yet somehow, thanks to this win, sit just one game out of first place.

Playoff Implications: AFC Wildcards; AFC South Division Championship, Because Someone Also Has to Win This One, I Guess.

As poor as the Eagles, Giants, and Redskins have all looked this season, there’s a case to be made for all three of those teams being better than both the Colts and the Texans. No one wants to win either of these divisions. It’s incredible.

Broncos 17 – Chargers 3: Denver’s defense shut down Philip Rivers and the Chargers to maintain their stranglehold on their division and move into a tie with New England for the Conference’s top seed in the playoffs.

Bengals 37 – Browns 3: The Bengals took one more step toward ending another intrigue-less playoff race. Like the Patriots, the Bengals sport a 10-2 record and a three-game lead. This division is over all but mathematically. The Bengals have a chance to make it official when they play the second-placed, 7-5 Steelers next Sunday.

Panthers 41 – Saints 38: … Are the Panthers about to go 16-0? They have two remaining games against the Falcons, who stink and their other two are against the Giants and the Buccaneers. One has to figure that they’d be heavily favored in each of those games. The biggest obstacle, it would seem, would be Ron Rivera possibly pulling Cam Newton in Weeks 16 or 17 if the Panthers have already sewn up home field advantage throughout the NFC Playoffs. There aren’t enough good things to say about how much fun this team has been to watch all year; such a wonderful, pleasant surprise for NFL fans.